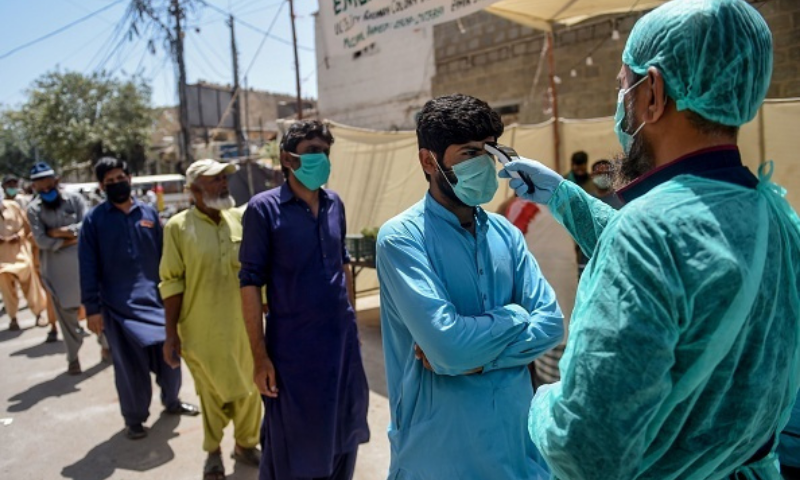 PESHAWAR: The administration in the coronavirus-infected districts of Khyber Pakhtunkhwa stepped up efforts to enforce precautionary measures against Covid-19 as 22 more died of the virus on Monday.

A report of health department said that the provincial tally of Covid-19 patients was 114,661 of whom 98,045 recovered from the ailment. It said that 1,109 patients recovered during the last 24 hours.

There are 13,460 active Covid-19 patients in the province while 3,165 persons have passed away of the ailment. Peshawar recorded 10 mortalities and 73 fresh cases while Mardan registered five deaths and 68 cases. Two persons each died of coronavirus in Bannu and Abbottabad and one each in Dir Upper, Kohat and Swat.

According to a report of World Health Organisation, four districts of Khyber Pakhtunkhwa are on top of the list of endemic areas in the country.

22 more fall prey to the virus in the province

Overall positivity rate in the province is 7.3 per cent against the nationally recorded 9 per cent but the positivity in high-risk districts is higher, according to the report.

Officials said that Khyber Pakhtunkhwa had been reporting 35 fatalities and 1,100 cases per day for the last one month, with more than 80 per cent deaths and cases being reported in Peshawar, Mardan, Swat, Nowshera, Abbottabad and Charsadda.

In Peshawar, district administration continued patrolling to strictly enforce the precautionary measures announced by National Command and Operation Centre. It sealed 84 shops and fined 21 persons for not following the SOPs.

A press release said that three under-training assistant commissioners Labiqa Akram, Alveena Faiz and Azka Fatima distributed masks among people on University Road. The administration was trying its best to scale up public awareness regarding prevention and control of coronavirus in the city, it said.

Deputy Commissioner Khalid Mahmood requested people to stay home and help the administration to stem transmission of virus, which was alarmingly high in the provincial capital. Anyone violating the Covid-19 SOPs would face stern action, he added.

Health officials said that Khyber Teaching Hospital had 105 Covid-19 patients, Hayatabad Medical Complex 156, Lady Reading Hospital 424, Covid-19 Hospital Nishtarabad had 63 patients while Swat had 72 patients. “We are upgrading services everywhere in the province to reduce burden on city hospitals and manage the patients in their home districts,” they said.

Vaccination continues in 82 designated centres and so far 55,300 health workers have been given first dose of the jab whereas 31,950 have been given the second dose of the vaccine. Officials said that 111,755 senior citizens were immunised against the virus.

They said that about 5,000 persons were getting free vaccination at the centre run by health department throughout the province. More than 33,000 senior citizens had received second dose of the vaccine, they said.

Officials said they were vaccinating 10,000 people including senior citizens and frontline health workers per day.

“The NCOC has been sending vaccine according to our demand. We are opening more centres after increase in vaccination,” they added.