A morbid grid of graves widens as excavators dig deep, piling up soil to make space for Indonesia’s pandemic dead to be laid to rest.

Ambulances, lights flashing, deliver bodies to the Jakarta burial site as trucks carry away dirt beside rows of rectangles carved out of the brown earth. 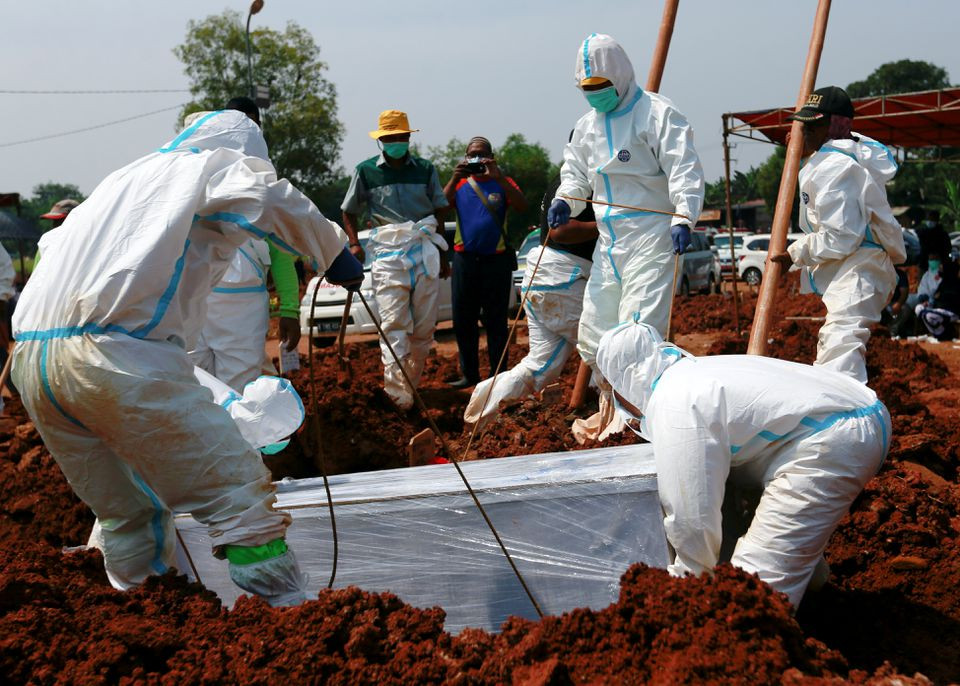 Workers in protective suits lower coffins into the ground next to graves where small wooden planks serve as makeshift headstones.

Dramatic drone footage of the Rorotan cemetery in Indonesia’s capital gives a chilling glimpse into a worsening epidemic that has seen deaths and infections soar in recent weeks, pushing hospitals to their limits. 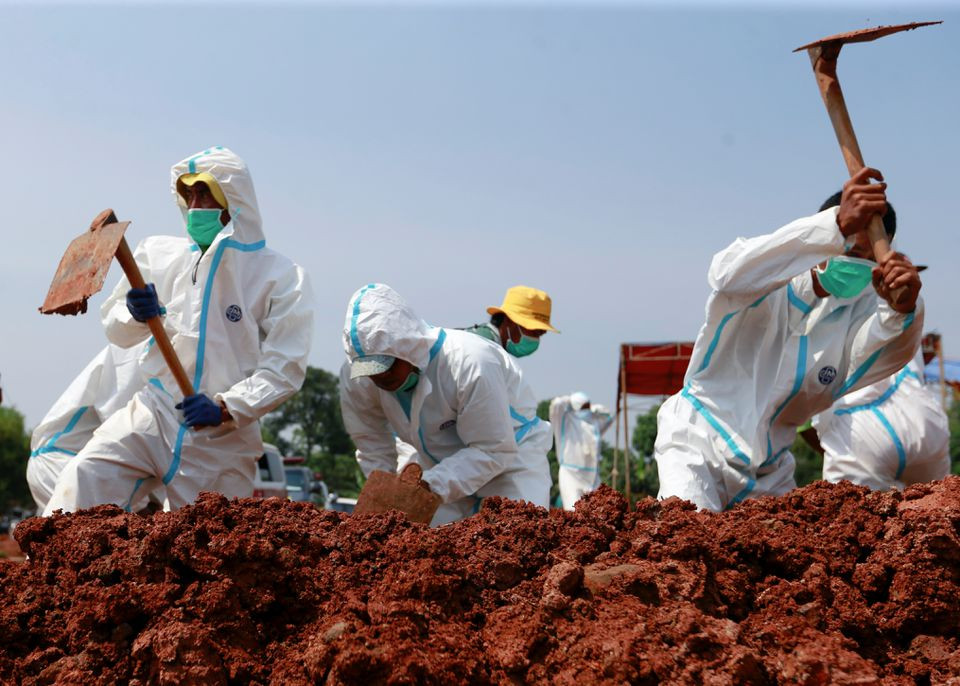 The cemetery is one of five exclusive for the city’s coronavirus dead, of which Indonesia saw more than 1,040 on Wednesday, more than double the national fatalities six days earlier.

According to the department that handles cemeteries, four of the five Jakarta Covid-19 burial grounds are now full.

Jakarta governor Anies Baswedan said burials in the city for people confirmed or suspected to have been infected with Covid-19 increased tenfold since May.

City data shows burials on average were 17 per day in May and 105 per day in June. 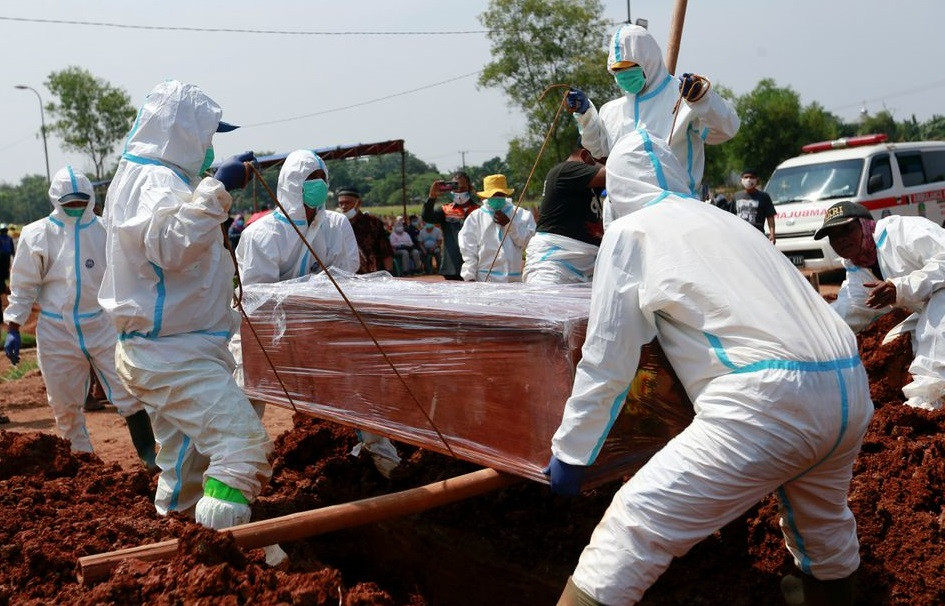 On Saturday alone, 392 people were buried.

The aerial footage captured by Reuters lays bare the stark reality – a huge brown clearing cut from a lush green field, rows of identical and newly filled plots and a stream of ambulances and works vehicles day and night.

“Deaths will keep rising as cases increase,” said Dr Pandu Riono, an epidemiologist at the University of Indonesia.

“We need to maximise efforts to stop the transmission.”

Indonesia has recorded more than 2.4 million cases of the coronavirus and 63,000 deaths overall, but the spread of the highly transmissible Delta variant, first identified in India, has seen record cases on most days since June 20. 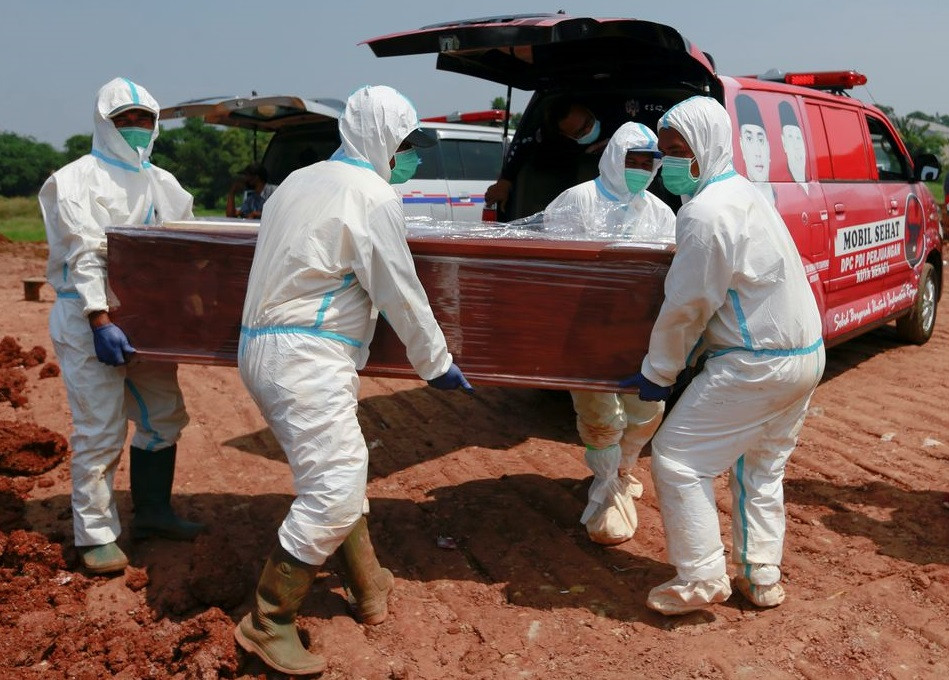 More patients have struggled to find beds, while oxygen supplies ran out in six cities on the most populous island of Java on Wednesday, according to the Business Competition Supervisory Commission.

The government imposed stricter curbs on movement, commerce, air travel and office work last week on Java and Bali islands to try to curtail the rise, but criticism over its response has mounted, with newspaper editorials accusing policymakers of protecting the economy over public health.

“With sharp criticism and public anger because of high number of Covid cases and collapsed health system … that trust for the government could erode,” said Edbert Gani, political researcher at Centre for Strategic and International Studies.