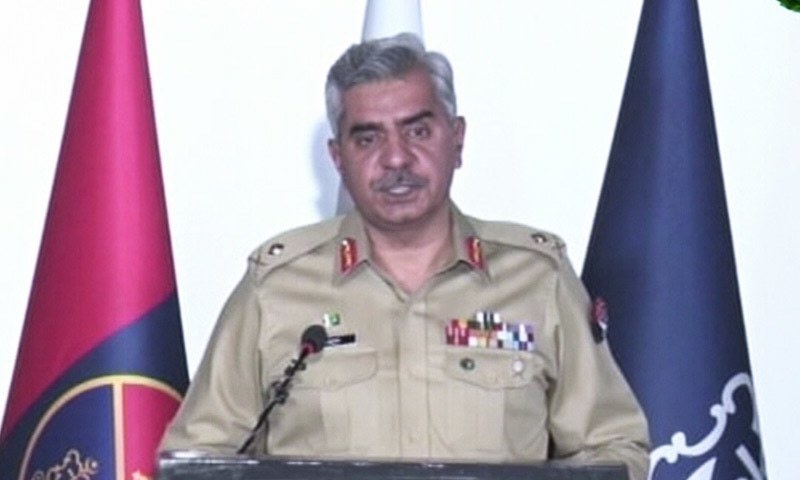 Director General of Inter-Services Public Relations (ISPR) Maj Gen Babar Iftikhar said that Pakistan Army troops have reached every corner of the country from 6am today (Monday) morning to help civil institutions in implementing the standard operating procedures (SOPs) against the coronavirus.

Addressing a press conference in Rawalpindi, he said teams had been constituted which would be led by brigadiers at the administrative division level and by lieutenant colonels at the district level.

The provincial apex committees would hold weekly meetings to discuss the overall situation and analyse areas with high positivity rates after which a plan of action would be decided, the DG ISPR said.

“The primary purpose of deployment of army troops is to help civil institutions and law enforcement agencies,” he said, adding that like the last time, Pakistan Army had decided not to claim any sort of internal security allowance during the deployment.

Gen Iftikhar said the primary responsibility for the implementation of precautionary measures against the coronavirus and the law and order situation lay with the civil institutions. The Pakistan Army would fully cooperate with law enforcement agencies as emergency responders to control the spread of the pandemic, he added.

The DG ISPR said that enhanced deployment had been done in 16 cities where the positivity rate was “very high”. These cities include Islamabad; Peshawar, Mardan, Nowshera, Charsadda and Swabi in Khyber Pakhtunkhwa; Rawalpindi, Lahore, Faisalabad, Multan, Bahawalpur and Gujranwala in Punjab; Karachi and Hyderabad in Sindh; Quetta in Balochistan and Muzaffarabad in Azad Jammu and Kashmir.

He stressed that following precautionary measures against the coronavirus was the “only effective response” to the pandemic.

The DG ISPR warned that the third wave of Covid-19 was “much more dangerous and fatal” and was affecting the whole world, especially the South Asian region.

He said coronavirus-related deaths were rising fast due to the speed and intensity of the pandemic, adding the healthcare infrastructure was under “severe pressure” because of the rapid increase in patients in critical care.

Giving further details of the coronavirus situation in the country, he said that 570 virus patients were on ventilators while 4,300 were in critical condition.

“The monthly average of corona deaths has been the highest in April. The worldwide fatality rate is 2.12pc while the fatality rate in Pakistan has risen over the world fatality rate for the first time during this pandemic to 2.16pc.

“Keeping the worsening corona situation in view, to protect the public and their health, Pakistan Army has been called under Article 245 to help civil institutions, according to the directions of the federal government,” he added.

The people’s confidence is the asset of the armed forces of Pakistan, Gen Babar stated.

He called on people to “fulfil our individual and collective responsibilities” so the public’s health and safety could be ensured. “We can remain safe from this pandemic by wearing face masks and implementing guidelines on social distancing,” he asserted.

On Friday, Prime Minister Imran Khan said he had asked the Pakistan Army to assist the police and law enforcement agencies in enforcing Covid-19 SOPs, warning that Pakistan may soon be facing a situation similar to India if the current trend continued.

He made the announcement after a meeting of the National Coordination Committee (NCC) which was also attended by the Chief of Army Staff Gen Qamar Javed Bajwa.

The interior ministry issued a notification on Sunday allowing the provinces and federal territories to seek the help of the army to enforce SOPs.

Last week, Pakistan recorded 157 deaths — the highest daily death toll since the start of the pandemic.