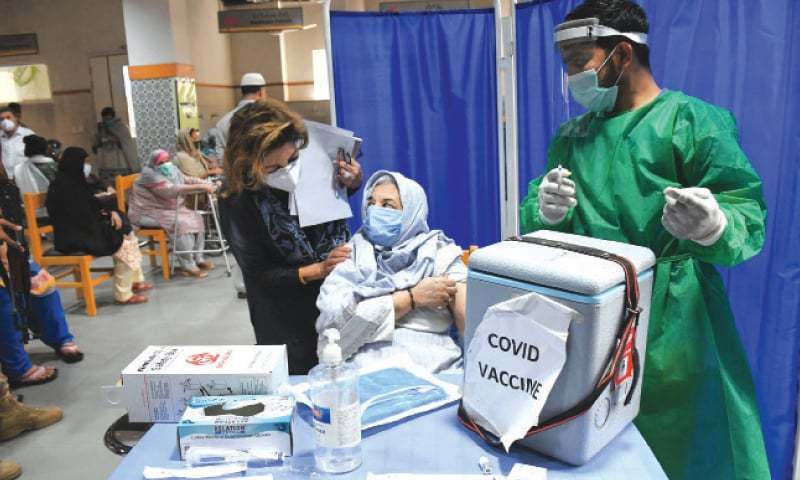 Covid-19 vaccinations have been made mandatory for educational staff in order to ensure the safe continuation of the education sector, according to a press release issued by the National Command and Operation Centre (NCOC) on Saturday.

The decision was taken in a meeting of the NCOC chaired by Federal Minister for Planning, Development and Special Initiatives Asad Umar and National Coordinator Lt Gen Hamood Uz Zaman Khan with Special Assistant to the Prime Minister on Health Dr Faisal Sultan also in attendance via video link.

The forum directed that inoculations for educational staff be completed by June 10, adding that walk-in vaccination had already been opened across the country for all teachers and school staff above 18.

The decision on mandatory inoculations was taken as the NCOC also set dates for examinations of grades 10 and 12 to be held from June 23 to July 29. The forum decided that provinces would be allowed to open staggered classes for grades 10 and 12 from May 31 for exam preparations, subject to compliance with stringent Covid-19 standard operating procedures (SOPs).

Last week, the NCOC had allowed the staggered reopening of educational institutions from June 7 in districts where the positivity rate was less than five per cent, adding that matric and intermediate exams would be held after June 20.

The NCOC also decided that from June 1, tourists above 50 years of age would not be allowed to stay in hotels in districts of Khyber Pakhtunkhawa, Gilgit-Baltistan and Azad Jammu and Kashmir without a vaccination certificate.

The same restriction would apply to tourists above 30 from July 1, said the press release.

Additionally, amusement parks, water parks and swimming pools would also be allowed to reopen with 50pc occupancy and strict SOPs in districts with a positivity rate at or below 5pc.

Saturday’s session was held to review the implementation of SOPs and the current progress of vaccine administration across the country and “expressed general satisfaction on the overall situation in the country”, the handout said. It added, however, that the forum warned about the high prevalence of the disease in Sindh.