The federal government on Tuesday announced a new set of restrictions, including a blanket ban on tourism and inter-provincial transport, in an attempt to contain a further rise in already mounting coronavirus cases during the upcoming Eidul Fitr holidays.

According to the Ministry of Interior, fresh restrictions also include closure of all tourist resorts, hotels, restaurants, shopping centres, parks, beaches, and other public places from May 8 to 16.

Travel nodes leading to the tourist destinations, particularly the scenic valleys of Murree, Swat, and northern Gilgit-Baltistan region, which attract hundreds of thousands of tourists from across the country during Eid holidays, will also remain closed during the said period, the ministry said.

There will be a complete ban on inter-provincial and inter-city transport during the Eid holidays, except for the residents of Gilgit-Baltistan, who will be allowed to travel to their hometowns.

Also read: Vaccination for all after Eid

Eidul Fitr, a three-day Muslim holiday, marks the end of the holy month of Ramazan, during which the faithful fast most of the day, and is usually celebrated by lavish daytime feasts and gatherings. This year the Eid holiday falls on mid-May.

Battling with a resurgence of the virus cases, Pakistan is racing against time to add more oxygen beds and ventilators to hospitals amid a surge in infections and deaths.

Health authorities warned of a situation similar to that in virus-ravaged India if the cases continued to rise at the current rate in the coming weeks.

Dr Faisal Sultan, adviser to the prime minister on health, told reporters that the government is continuously monitoring the oxygen situation in the country and trying to improve it. 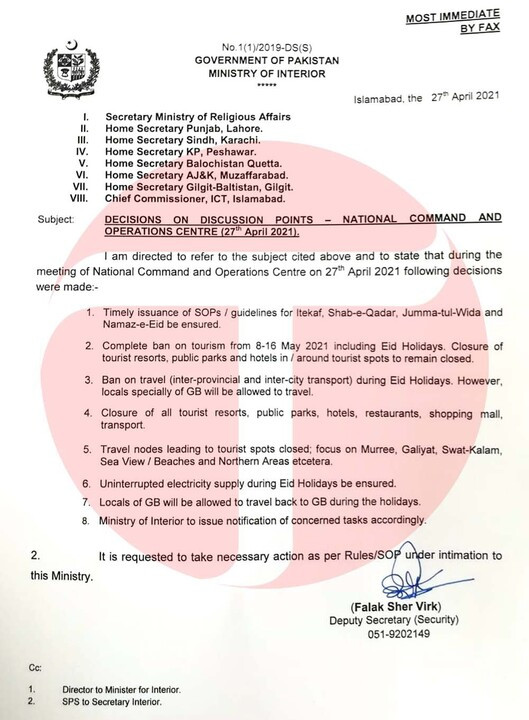