PARIS – As the Omicron variant has become the dominant strain in parts of the world, health experts in France report a stronger variant of novel coronavirus dubbed as ‘IHU’.

The new variant worries experts because it is different from the types of existing variants while vaccines are not developed to fight the mutated ones.

Reports in the media said the new COVID-19 variant IHU has 46 mutations and is said to be more vaccine-resistant.

A senior official who runs the unit that discovered the new strain, said, “We indeed have several cases of this new variant in the Marseille geographical area and named it variant IHU. Two new genomes have just been submitted”.

The IHU variant has been dubbed B.1.640.2 and carries the E484K mutation, which is believed to make it more vaccine-resistant.

Meanwhile, it has not shown any signs of outcompeting omicron in terms of transmissibility. At least a dozen cases have been found in Marseille, a port city in southern France, with the first believed to have originated from Cameroon.

A foreign publication quoting officials said “14 amino acid substitutions, including N5O1Y and E484K, and 9 deletions are located in the spike protein”, it also added that “this genotype pattern led to create a new Pangolin lineage named B.1.640.2, which is a phylogenetic sister group to the old B.1.640 lineage renamed B. l.640.1”.

A top epidemiologist and health economist Eric Feigl-Ding shared a tweet saying “French scientists have ‘rung the bell’ after discovering a cluster of 12 cases of a variant of ‘atypical combination’ with  – 46 mutations & 37 deletions – in southern France after index case returned from Cameroon”.

🔔NEW VARIANT—French scientists have “rung the bell” after discovering a cluster 12 cases of a variant of “atypical combination” with **46 mutations & 37 deletions** in southern France after index case returned from Cameroon🇨🇲—dubbed #B16402.🧵 #COVID19 https://t.co/SHXCbnkQUr pic.twitter.com/UwdL2hSW5g

However, Omicron is still the dominant strain in Pakistan and most parts of the world while more variant’s threat is rapidly rising. Omicron, which was first detected in a sample taken from South Africa, has spread to more than 100 countries.

Here are some of the leading Covid variants 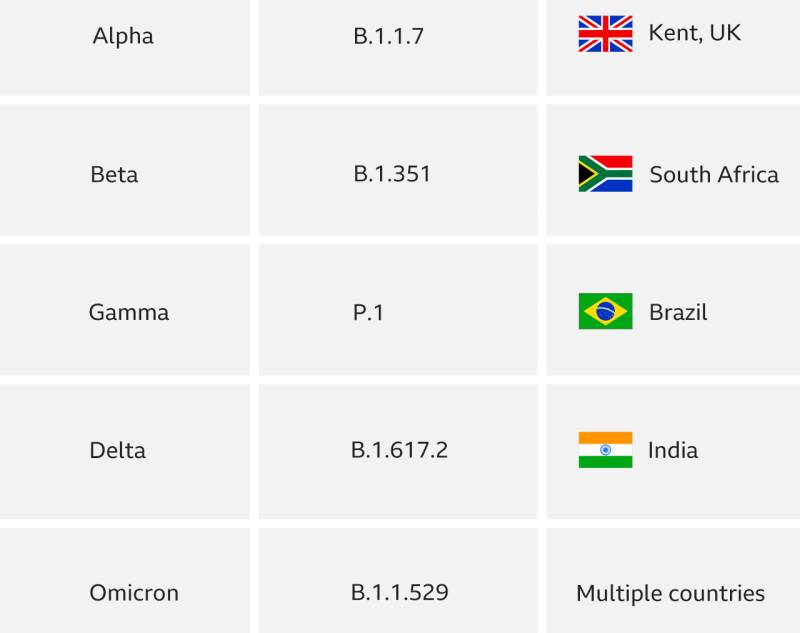