Home Updates In Covid era, Pakistan turns to mango diplomacy in the US – Pakistan
Updates
July 16, 2021

In Covid era, Pakistan turns to mango diplomacy in the US – Pakistan 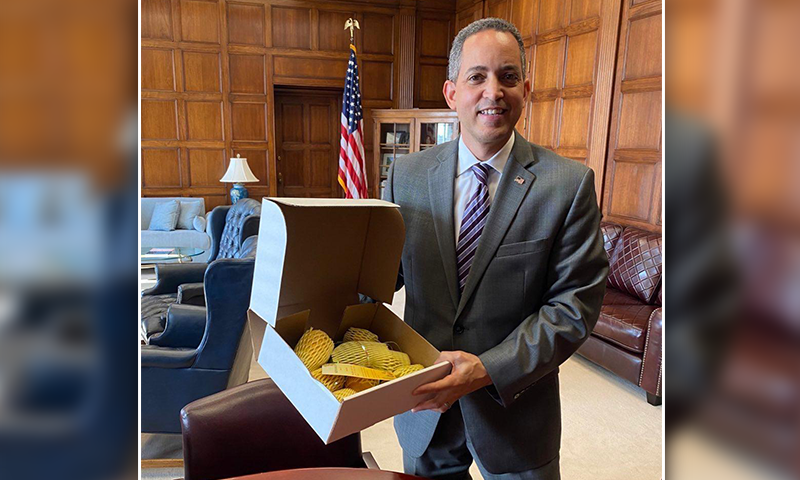 “Never thought diplomacy could be so sweet,” commented a US lawmaker as he received a box of Pakistani mangoes.

“And I never thought mangoes could be so delicious,” said another US official, while nibbling a piece of mango with a fork.

They were among a group of selected US lawmakers, officials, media personnel and scholars invited to a mango-diplomacy dinner at the residence of Pakistani Ambassador to the US Asad Majeed Khan last week. Congresswoman Sheila Jackson Lee and Congressmen Jim Banks, Tom Suozzi and Pete Sessions were also among the guests.

At the ambassador’s residence, the guests were introduced to Pakistani cuisine and traditional beverages, such as lassi — a drink that is made from cold milk and yogurt, blended either in a mixer or by hand.

A Pakistani waiter there, however, had a complaint.

“I wish they knew how to …,” he said in Urdu, placing a tray of mango pieces on a table.

“How to what?” asked a Pakistani guest on hearing his complaint.

“I wish they knew the proper way of eating mangoes, dishing them out from a bucket and holding them in their hands,” the waiter said.

“That would be the day,” the guest responded, helping himself to a piece with a fork.

Meanwhile, other guests pointed out that the Covid-19 pandemic had created new space for non-conventional diplomacy, such as exchanging mangoes.

A gift of mangoes

In a city where it was normal for senior diplomats to receive four to five invitations a day, almost no diplomatic reception has been held since early 2020, when the pandemic hit Washington.

Taking advantage of the situation, the Pakistan embassy in Washington asked Islamabad to send as many boxes of mangoes as possible. And the Ministry of Foreign Affairs, which was already looking for non-conventional means to reach out, obliged.

So far, the ministry has sent boxes of mangoes to leaders and officials in more than 32 countries, including the US and China. Others on the list include India, Iran, the Gulf states, Turkey, the United Kingdom, Afghanistan, Bangladesh and Russia.

Most of the boxes contained Chaunsa, Sindhri and Anwar Ratool varites of mango.

Pakistan has been sending boxes of mangoes to India since the late 1980s, but in 2015, it formally launched mango-diplomacy by sending similar boxes to other countries as well.

In doing so, it copied Pakistani mango growers who often send boxes of their produce to important people to win favours.

The Pakistan embassy in Washington, meanwhile, is sending boxes of mangoes to members of the US Congress, including Pakistan caucus co-chairs and senior officials at the White House National Security Council, State Department, Pentagon and Department of Agriculture.

Senior members of Washington’s think-tank community and the US media are also receiving this gift.

Apparently, former Secretary of State Hillary Clinton is also on the list. She played a key role in encouraging Pakistani traders to export mangoes to the US when she was in the Obama administration.

Pakistan is the world’s fifth-largest producer of mangoes. In 2019, before the pandemic hit the international market, Pakistan sold a record 120,000 tonnes of mangoes to the world. In June this year, Pakistan created a new five-year record of exporting mangoes to China.

Pakistan grows about 400 varieties of mangoes against India’s 1,200, which is the world’s largest producer of mangoes, growing nearly eight times the quantity that Pakistan does. But Pakistan claims that it beats India in quality.

A former diplomat and Congress party leader Mani Shankar Aiyar once told BBC that he too believed Pakistani mangoes were better.

“Having served in the Indian consulate in Karachi, I can tell you that Indian mangoes would have a hard time matching theirs, unless we move in early with the Alphonso,” Aiyar said, referring to a particularly sweet variety of mangoes found in Maharashtra.