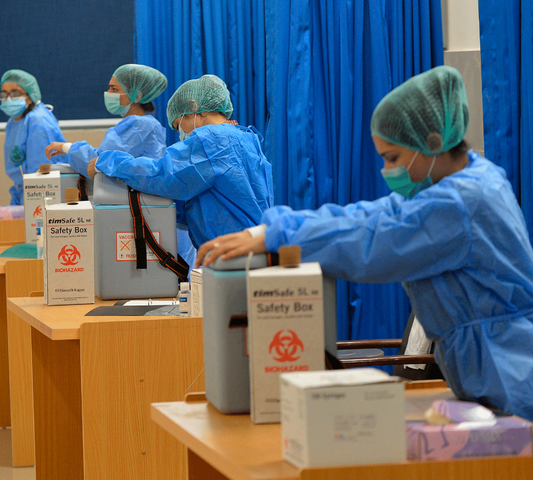 The government has said it plans to vaccinate 70 per cent of the country’s high-risk population by the end of the year.

Pakistan on Wednesday started vaccinating frontline health workers against the coronavirus amid a steady decline in confirmed cases and fatalities.

The start of the vaccine campaign comes days after Pakistan received half a million doses of the Sinopharm vaccine donated by China.

At a ceremony in Islamabad, Minister for Planning, Development and Special Initiatives Asad Umar paid tribute to the health workers, saying they were real heroes as they put their lives at risk in the fight against Covid-19.

The government has said it plans to vaccinate 70 per cent of the country’s high-risk population by the end of the year.

“I can’t say with certainty, but we would still need around two months to start a mass vaccination campaign,” she added.

Pulmonologist and Covid-19 expert Shazli Manzoor told AFP that the Chinese vaccine suited impoverished Pakistan because it could be stored at between two and eight degrees Celsius, compared to -70°C for other vaccines.

He said the government would set up special clinics to monitor how the population was responding to the vaccinations.

Some doctors have questioned how effective the vaccine will be.

“It lacks transparency and data compared to other vaccines,” one Pakistani health expert told AFP.

Up to 17 million doses of the British-Swedish produced AstraZeneca vaccine have been promised to Pakistan in the first half of 2021 under the Covax global pool, the government has said.

A doctor in Islamabad was the first health worker to receive the jab in a symbolic ceremony in front of Prime Minister Imran Khan on Tuesday night.