The Foreign Office on Saturday said that the New York State Assembly’s decision to adopt a resolution marking Feb 5 as ‘Kashmir-American Day’ was a “welcome development”.

“The resolution appreciates the courage and perseverance of the Kashmiri people and recognises their unique cultural and religious identity. It also underscores that ‘the State of New York endeavours to champion human rights including the freedom of religion, movement, and expression for all Kashmiri people’,” FO spokesman Zahid Hafeez Chaudri was quoted as saying in a statement.

“The resolution is yet another manifestation of continuing international support to the Kashmiri people in the just struggle for their inalienable right to self-determination, as enshrined in the relevant UN Security Council resolutions. It is also proof that India cannot hide its gross and systemic violations of human rights of the Kashmiri people anymore.” 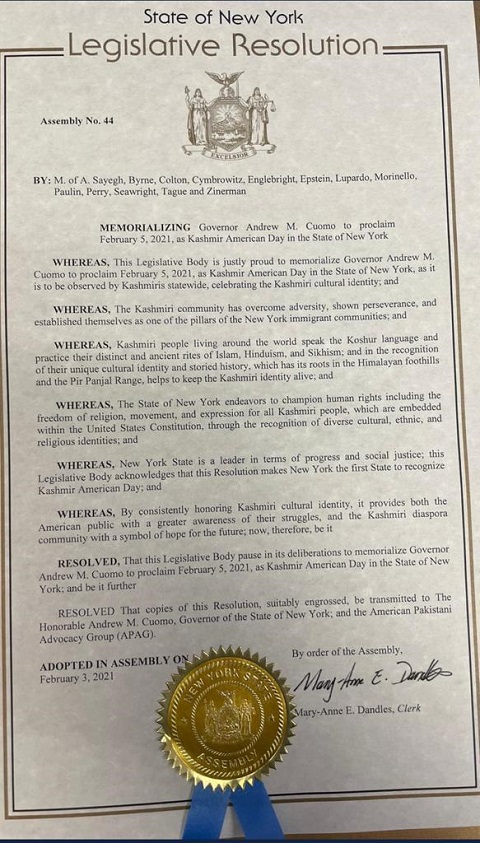 The FO spokesman also thanked assembly member Nader Sayegh and the American Pakistani Advocacy Group for their help in this regard.

On Wednesday, New York became the first state in the United States to proclaim February 5, 2021, as ‘Kashmir-American Day’ when Pakistani and Kashmiri communities across the world observed Kashmir Solidarity Day, voicing full support to the just struggle of Kashmiri people for the exercise of their UN-promised right to self-determination.

The New York State Assembly marked Feb 5 as ‘Kashmir-American Day’ by adopting a resolution through a voice vote, a significant development which was the result of years of efforts by the American-Pakistani Advocacy Group.

“The State of New York endeavours to champion human rights including the freedom of religion, movement, and expression for all Kashmiri people,” the resolution said. The APAG is a non-profit social service and advocacy organisation based in New York.

Meanwhile, Pakistan’s missions across the United States marked the day by holding virtual meetings in view of Covid-19 restrictions and held photo exhibitions to highlight Kashmiris’ plight under oppressive Indian occupation as well as their valiant struggle for their UN-pledged right to self-determination.

Pakistan’s Ambassador to the UN Munir Akram and Ambassador to the US Asad Majeed Khan, as well as Consul General in New York Ayesha Ali, participated in separate webinars along with academics, Kashmiri leaders and activists, to highlight the significance of the day and reiterate Pakistan’s resolve to stand by the Kashmiri people.

In New York, Pakistan’s Permanent Mission to the UN organised a photo exhibition depicting the struggle of the Kashmiri people and efforts by Pakistani leaders and diplomats to seek a resolution of the decades-old dispute at the world body.

Also featured was a digital album titled: ‘Kashmir: between resistance and resilience’, a collection of photographs featured in international media on the struggles of Kashmiris, their plight and their current situation.