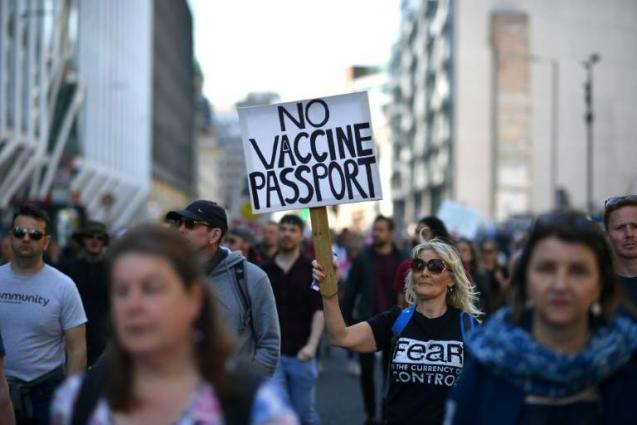 Huge crowds protested in London on Saturday against Britain’s remaining coronavirus restrictions, the mandatory use of masks and the possible introduction of so-called vaccine passports

The demonstrators marched along several major arteries, including the main shopping district Oxford Street, with videos and photos showing thousands in attendance.

An exception for protests carries requirements including a Covid-19 risk assessment being conducted.

“Anyone coming into London for a protest must make sure their gathering is lawful, with a risk assessment carried out by the organiser,” the Metropolitan Police Service said on Twitter.

“Officers are on site and will continue to engage with those present,” it later added of the Hyde Park protest.

There were no reports of arrests by late afternoon.

Anti-lockdown protests by hundreds or even thousands have occurred sporadically during the pandemic, often resulting in a small number of arrests.

England’s latest Covid-19 lockdown measures have been in place since early January, after the UK saw a surge in cases.

Months of restrictions alongside a successful vaccine rollout — with more than 45 million doses administered — has seen the situation improve.

Pandemic indicators such as infections, hospitalisations and deaths are at levels not seen since last September.

Another major easing is due in mid-May, when some indoor socialising can resume, before nearly all restrictions are ended in late June.

The government is looking at introducing a passport scheme for a variety of settings, including leisure and hospitality as well as foreign travel, to verify if people have been vaccinated or have immunity from the virus.

Britain has been among the hardest hit in Europe by Covid-19, recording more than 127,000 deaths within 28 days of a positive test.