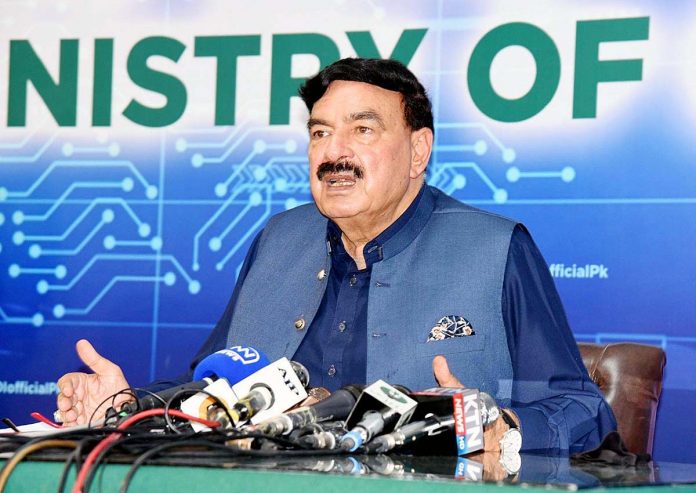 ISLAMABAD: Interior Minister Sheikh Rasheed Ahmad Monday urged the people to follow anti-corona protocols to control the spread of deadly virus during Muharram-ul-Haram. Addressing a presser, he said Ulema should guide the people to act on the standard operating procedures adding all measures would be taken to maintain law and order across the country during Muharram-ul-Haram.

He said it was responsibility of every countryman to promote the culture of peace and brotherhood during the holy days of Muharram to fail the nefarious designs of enemies. He said India’s Research and Analysis Wing, National Directorate of Security and Israeli spy agency were trying to sabotage peace in Pakistan and they were also using media to create disharmony among various sections of the society of Pakistan.

He said it was high time to jointly fail the conspiracies of enemies as they were always active against our beloved country. He said opposition parties were unaware of the regional changes, expected in upcoming six months.

He said he held two meetings with Chinese ambassador and assured him to further tighten the security of Chinese nationals working in Pakistan. The minister made it clear that China Pakistan Economic Corridor project would not become the victim of any external conspiracy.

He said, “No one can become a hurdle in the relations between Pakistan and China.”
He said the interior ministry had completed its investigation in Afghan ambassador’s daughter case and it had shared factual situation with Afghan investigation team through Foreign Office.

He said a vaccination portal would be developed in a few days to serve the vaccination certificates to the citizens for Muslim countries. He said the government had decided to start 1122 service in the federal capital to ensure immediate help during flood like situation as no such quick response service was available here.

He said new vehicles would be provided for the purpose.
He said strict action would be taken against those allegedly involved in illegal construction in Sector E-11 occupying nullas causing overflow with loss of lives and property.

He proposed Nawaz Sharif to come back to Pakistan and face his court cases if he was true leader. He announced to cancel his annual event of public gathering and fireworks at Lal Haveli on August 13, due to prevailing corona situation.

Scapegoating must be avoided to counter spoilers of Afghan peace