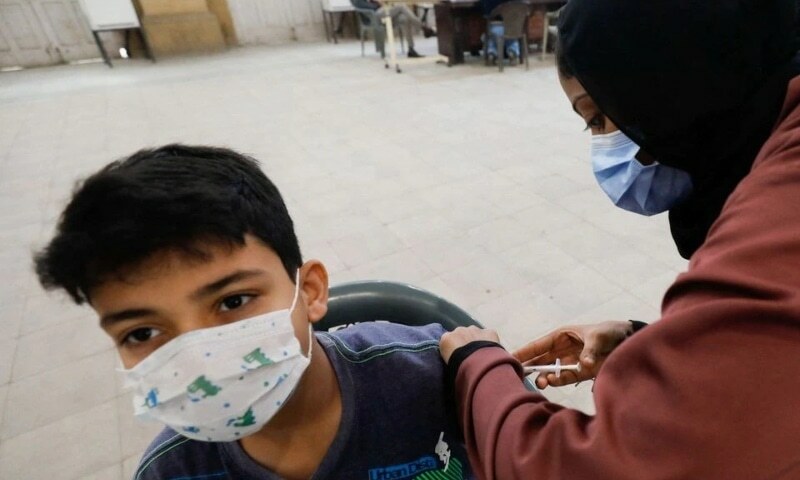 Sindh has reported 3,089 coronavirus cases during the last 24 hours, according to a handout issued by the Chief Minister’s Office on Friday, the highest number of daily infections since the pandemic began.

According to the handout, 15,719 samples were tested during this period of which 3,089 were positive, translating into a positivity rate of 19.7 per cent.

The previous highest for daily infections in Sindh was reported on June 11, 2020 — during Pakistan’s first coronavirus wave — when 3,038 infections were detected in the province.

Meanwhile, no new deaths were reported in the province during the last 24 hours. The death toll from the virus remains at 7,693 while 495,663 individuals have been infected since Feb 2020.

The latest surge in cases is being driven by the Omicron variant of the coronavirus which has triggered a fifth wave of the disease in the country.

In light of the recent surge in cases, Pakistan has started administering booster doses to the population. Earlier today, the National Command and Operation Centre (NCOC) further reduced the age limit for booster jabs.

“From tomorrow (Saturday) onwards, citizens over 18 years will be eligible for a free booster dose of their choice. Booster (one dose) will be administered after a six-month gap from complete vaccination,” the forum said.

Earlier, people who were 30 years or older and immunocompromised individuals above 12 years of age could receive a booster dose.

Data from NCOC the released earlier today showed that Karachi’s coronavirus positivity rate had jumped to 28.8 per cent in the last 24 hours — the highest in the country.

Lahore had the second-highest positivity rate at 9.6pc, followed by Islamabad at 5.5pc. The positivity rate in all other major cities remained below 5pc, the data showed.

Decision on closing schools will be taken together with NCOC: Murad

Separately, Sindh Chief Minister Syed Murad Ali Shah said that any decision regarding closing schools would be taken in consultation with the NCOC.

“Lots of people have reservations when we place restrictions. We are very closely watching our hospitalisations, critical care [admissions] and deaths but there has been no increase in them,” he said.

However, the chief minister cautioned that cases were still rising in the country.