Home Updates ‘We will perish or survive together’: PM Imran calls for global strategy to recover from Covid pandemic – Pakistan
Updates
February 17, 2021

‘We will perish or survive together’: PM Imran calls for global strategy to recover from Covid pandemic – Pakistan 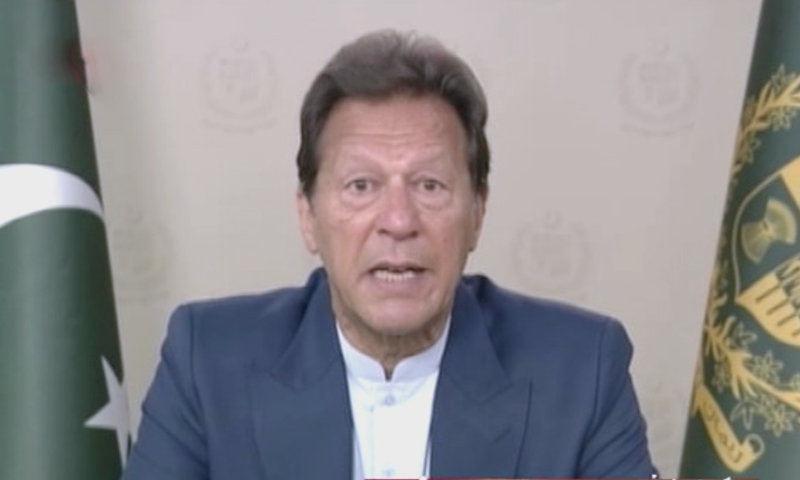 Prime Minister Imran Khan on Wednesday highlighted the need to devise a joint strategy to confront the global economic shocks triggered by the Covid-19 pandemic, saying “we will perish or survive together.”

While delivering a keynote address at the governing council of the International Fund for Agricultural Development (IFAD) virtually, the premier also spoke about the dangers of global hunger and malnutrition affecting hundreds of millions of people, cautioning that the world today faced a “looming agricultural crisis”.

He said agriculture was central to human survival and 600m people suffered from hunger even as the global population was about to hit eight billion.

The Covid-19 pandemic is likely to push another 100m people into extreme poverty, the prime minister noted, saying more than 20 countries were food insecure, while the World Food Programme had warned of the danger of famine in some of the poorest countries and conflict zones.

“The world faces multiple challenges in recovering from the pandemic and achieving [the] vital first two sustainable development goals (SDGs) — no poverty and zero hunger,” Imran said, adding that there was a lack of financing, shortage of investment, trade distortions, unsustainable production and consumption patterns, degradation of agricultural lands and forests, an impending water crisis, loss of biodiversity, and polluted rivers and oceans.

“We need a revolution in our vision of our future. The Covid-19 pandemic and the climate crisis should drive home the message to all rich and poor, weak or powerful that their destinies are intertwined. We will perish or survive together,” he emphasised.

Prime Minister Imran stressed that the concepts of geostrategic adversaries, regional or global domination, of the political advantages of foreign intervention and occupation, and the oppression of peoples are “outdated and will soon be seen as irrelevant”.

“We need a common plan and strategy for global recovery and survival and prosperity of all humanity
in response to the recession triggered by the Covid-19 crisis,” he said, recalling his proposal for a global initiative on debt relief last April.

While the debt suspension announced by the G20 countries and the emergency lending programmes of the World Bank, IMF and others have provided “some breathing space”, the prime minister said, the developing countries require $4.3 trillion to recover from the pandemic and achieve the SDGs, according to the latest estimates.

Imran reiterated the measures he proposed at a special session of the United Nations General Assembly last December for the generation of early financing to enable developing countries’ recovery from the Covid-19 crisis, which included: comprehensive debt relief and restructuring, creation of $500 million in special drawing rights (SDRs), larger concessional financing, and measures to halt and recover illicit financial flows from developing countries to haven destinations and richer countries.

But he said the world “need[s] to go much further” if it were to end poverty and hunger, for which he proposed the following five-point agenda:

1- We need to invest in sustainable agriculture infrastructure to facilitate transport, production and distribution of agricultural inputs and food products, for which the ‘green lanes’ created by China are a good example.

2- Governments need to more actively ensure adequate and fair prices for agricultural and food products. “The so-called magic of the marketplace should be balanced with a very visible hand of the state. We in Pakistan have suffered from market manipulations by monopolists and hoarders. Farmers should not be left to the mercy of the corporations; at the same time, international agricultural trade must be rationalised. The huge agriculture subsidies provided by certain richer economies distort global markets and make it impossible for farmers in the developing countries to compete,” the premier said.

3- The new and breakthrough agricultural technologies and techniques must be consciously applied to enhance food production, ensure efficient usage of water and land, and above all improve seed quality. IFAD and the FAO can play an important role in this context.

4- The adoption of digital technologies is as vital in agriculture as in other economic sectors. Ensuring internet and broadband access to the rural areas will be vital for their integration into national and global supply chains.

5- We must rethink our patterns of food consumption and production. We can eat better and many of us would do well to eat less. We can produce food with greater respect for nature, we can stop the pollution of our lakes, rivers and oceans. We can produce more with less water and without dangerous chemicals.

Prime Minister Imran further said a new strategy for sustainable food production and consumption should be considered and adopted at the Food Systems Summit scheduled for next year.

As part of national development efforts, he said his government had accorded the highest priority to achieve SDG-1 (no poverty) and SDG-2 (zero hunger).

The premier said his government had provided a relief package of around $8 billion during the pandemic “despite our financial difficulties”. Through the Ehsaas programme, the poorest families and other vulnerable groups were provided emergency cash assistance by utilising digital technologies and databases.

He added that the agriculture sector, which had to grapple with the twin challenges of Covid-19 and locust attacks, continued to have his “utmost attention”, while budgetary allocation had been increased almost three times and the growth target for the current year had been set at 3.5 per cent.

The government also plans to plant 10 billion trees over the next three years and will set aside eight large areas as national reserves or national parks.

“Under the China-Pakistan Economic Corridor, agricultural modernisation has been included as a vital element of our development strategy. This will move us significantly towards combatting hunger and poverty,” the prime minister said.

He emphasised that the efforts of developing countries like Pakistan to promote sustainable development and eliminate poverty and hunger “can only succeed through international cooperation”.

“We desire such cooperation with all countries,” he said, appreciating the role played by IFAD in promoting such partnerships.